Your hand has a snuff box, each of your eyes has a third lid, and you have ribs that float. A section of your butt shares its name with a group of towns in Belgium. You also have Luschka’s crypts and zonules of Zinn.
Let’s look inside you, shall we?

The name Luschka’s crypts sounds like a location in Castlevania. But in your body, crypts are narrow pits or pockets caused by folds in your tissues. You may have them in your tonsils, your small intestine, or elsewhere. Luschka’s crypts happen to hang out in your gallbladder’s mucous membranes.
The crypts’ name comes from Hubert von Luschka, a 19th-century German anatomist. Hubert found and identified quite a few structures, which is why your body has Luschka’s tonsil in your throat, the foramina of Luschka in your brain, the joints of Luschka in the spine, the nerve of Luschka near the spine, and more.
Not everyone has Luschka’s crypts. If you don’t have them, be glad, because they’re associated with the development of gallstones. If you want to know if you’ve got them, you’re pretty much out of luck, because they’re very small and most doctors don’t notice them until after they remove a gallstone sufferer’s gallbladder.

If you’re in love, thank your Herring bodies.
Herring bodies aren’t fish, which is a shame, because tiny silver swimmers flowing through your organs would make the human body more interesting. ButHerring bodies do have their uses.
Named for Percy Theodore Herring, a young British doctor who discovered them in 1908, Herring bodies are roughly oval structures in the pituitary gland at the base of your brain. The pituitary produces various hormones; Herring bodies store the hormones and release them into the bloodstream. One of the hormones is oxytocin, sometimes called the “love hormone” because it seems to help people feel trust and attraction.
Other than getting hormones from gland to blood, the Herring bodies don’t offer much of pressing interest. But if you dote on phrases like “hypothalamohypophyseal tract” and “neurosecretory material,” which fill the medical literature on Herring bodies, I wish you many hours of happy reading.

Without the zonules of Zinn, you couldn’t see clearly.
The zonules are ligaments: tough, fibrous tissues that connect body parts. A zonule of Zinn is a round ligament in each eye behind the iris — the part of the eye with the color.
The zonule connects the eye’s lens to the ciliary body, a muscle that pulls on the zonules to make the eye’s lens focus on objects far away and loosens its grip to let the lens focus on items close up.
The zonules got their name from the 18th-century anatomist who discovered them, Johann Gottfried Zinn. They’re among the smallest items on this list. These crucial ligaments are less than 100 microns long — and as I’m sure we all know, a micron is a millionth of a meter. 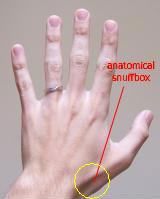 The anatomical snuff box is on the back of your hand: A thin, shallow, triangular hollow behind the base of your thumb and just above your wrist.
Why call it a snuff box? Back when people snorted snuff — powdered tobacco — they carried it around in boxes. To sniff it up, they scattered it on the back of the hand between thumb and wrist. The practice was so popular that people started calling that part of the hand the snuff box.
The anatomical snuff box doesn’t do much, but it’s involved in a medical test with a great name: Finkelstein’s maneuver. Bend your thumb across your palm; close your fingers over the thumb to make a fist; and bend your wrist toward your pinky. If your anatomical snuff box hurts, then you may have an inflammation in some of your wrist tendons called de Quervain tenosynovitis.

Floating isn’t for ribs, which we expect to hold tight to the breastbone and backbone. So why do people have floating ribs?
Because they hang unmoored, at least on one end. While most of your ribs curve forward from your backbone and attach to your breastbone, the bottom ribs end before they reach the breastbone, leaving their cartilaginous tips floating inside your body. No one knows exactly why.
Since your floaters are unattached at one end, they can slip out of position if your body gets banged around, resulting in an ailment named (ready?) floating rib syndrome. It hurts like a dagger in the back, and an activity as simple as deep breathing can intensify the pain. Don’t let it happen to you.
Fun fact: If you ever hear that a model has had a surgeon remove her ribs so that she could shrink her waistline, odds are that the doctor yanked the floating ribs.

It’s not exactly triangular in this drawing, but it’s close enough for butt anatomy. https://commons.wikimedia.org/wiki/File:Gray1077.png

This blog does not recommend pulling people’s eyes apart. https://commons.wikimedia.org/wiki/File:Gray892.png

Next to the tear duct (the little pink bean in the corner of either eye near the nose) lies a tiny, crescent-shaped membrane that scientists call the plica semilunaris, or third eyelid.
You can see it at work in birds, where it sweeps across the eye from side to side rather than up and down like the other eyelids. But the human plica doesn’t sweep. Exactly why evolution immobilized it isn’t clear.
The human plica helps your eye move by blocking the inside of your eyelid — or a least a part of it — from touching your eyeball. Otherwise, your eyes might stick to the lids. And since it’s near the tear ducts, the plica helps to keep eyes lubricated and drain tears away.
It might even help you win a little cash. Bet someone that he’s got three eyelids; if he says you’re full of it, take his money.

People seem to worry a lot about being fit — but fit for what? As my lovely bride Lea Seidman Hernandez has pointed out, a champion heavyweight wrestler’s body, while undeniably athletic, isn’t necessarily fit for figure skating.

I prefer to concentrate on health rather than fitness. If I want to be fit for anything, it’s for living a long time. (I’m admittedly biased, since I wrote The Longevity Sourcebook. You can find it on Amazon.)

Unfortunately, health isn’t as obvious as fitness. A friend of mine, a model, had a beautiful body, but she suffered terribly from lyme disease. Another friend, a convention cosplayer who looked sensational, has had irritable bowel syndrome. Other people who look fit could have fibromyalgia, lupus, migraines, chronic fatigue syndrome, or schizophrenia.

Goodness knows that I want a body that looks so trim and muscular that it draws admiring stares — but I’ll settle for one that lives a long, healthy, disease-free life. Since the two often come together, maybe I’ll get both if I eat and exercise right.